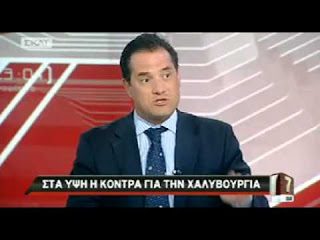 Lies upon lies
The Radical [Rizospastis],
Organ of the Central Committee of the Communist Party of Greece, 22 July 2012
Translated by: Lenin Reloaded
Propaganda attacking the steelworkers has reached a fever pitch: They say:


-- "The right to work is sacred." Those speaking of a "right to work" are the guardians of an anarchic, rotten system, which throws millions of people into unemployment. Under conditions of crisis, indeed, unemployment is catapulted in capitalism, due to the uncontrollable destruction of productive forces, with labor power being first in line.  Already, the unemployed in Greece are 1.500.000. Which government has defended their right to work? The government and its parties are defending Manesis, who has already fired 120 workers and who, according to his own statements, intended to shut down the factory and let hundreds of families starve. When it comes to the handful of strike-breakers, the right to work is sacred: this is what the government and its lackeys are saying; but for the hundreds of strikers struggling on behalf of their fired co-workers, it isn't sacred. Their lies and hypocrisy are beyond belief.


-- "We have to apply the law." But which law? The law that proclaims 9 out of 10 strikes illegal. The law that allows employers to impose part-time work on workers, and hence wages that look more like tips. The law that cancels benefits for heavy and health-threatening labor for entire categories of workers who are certain to die slaving, before they manage to go on pension. The law that never punishes the employer when the worker is killed in his inferno. The law that deprives the family of the worker from basic services in Health and Education. These are the laws that they want to see applied; that's why they behave like mad dogs, using D.A.s and court orders whenever workers and the people attempt to resist. The court order against the strike is an alibi and a fabrication. Their justice is class justice. For, according to the letter of the law, the lay-offs that took place during the strike were also illegal, and the workers protested this. But no one cared to apply this law. The decision of the Steelworkers to strike was fully legal, too. But this means nothing to those who took up the mission to break it, one way or another. Their system is unjust from its very foundations toward workers and the people. From the standpoint of the workers, justice is their own struggle to survive, to stop those policies that drive them to crushing poverty, to overturn bourgeois injustice, to subvert bourgeois power.


-- "Intransigence doesn't help, we must have dialogue." They know what they are talking about. They want labor unionists and a workers' movement that assist them, not oppose them. They want "the collaboration of classes", so they can move freely with the barbaric measures they are imposing; not unions willing to fight for workers' rights. They want Unions with leaderships like the one of the Volos Steelworks, proud to wear the seal of approval of the employer, since it consented to chain the workers down and to accept labor conditions such that two workers have already come close to losing their lives in respective "work accidents." They want "social partners", like those they have in the Union of Private Sector Employees and elsewhere, who will behave like proper victims. They want a labor "movement" tailored to the needs of the employers and of government policy, a fifth column against labor struggles, slanderers and saboteurs of class-conscious unions.


-- "Labor struggles shut factories down." A bold-faced lie. Let them answer: How many labor mobilizations have taken place in the last few months in SIDENOR, which was recently closed? How many class-conscious labor unions did the 600 businesses that were shut down during the last year in Northern Greece have? How many strikes were organized in these businesses? How many, out of the 1.5 million unemployed,  used to work in businesses where a strong, class-conscious union was active in struggle? It is the crisis that shuts factories down while making other factories stronger.  Factories are closed even under conditions of capitalist development (e.g. that of Trikolan), when the capitalist either does not make the profit he expects to make, or is crushed by competition, or moves his capital to other, more profitable sectors of the economy. Those who say that it is labor struggles that close factories are those who in the 1990s, and in the name of the "reconstruction of the Balkans", funded even the purchase of fax machines for businesses that closed operations in Greece so as to move to Bulgaria, Skopje, Albania and Rumania, where wages were drastically lower than those of Greece, making their profit far higher.
One last thing: The "good ol' boys" like Adonis Georgiadis, who appeared in SKY News to "unveil" the existence of a "front" between the Communist Party of Greece and the fascists of "Golden Dawn", reputedly jointly acting on behalf of the Steelworkers, are vicious liars. They try to slander the Communist Party and the just struggle of the Steelworkers and to give the advantage to the pitbulls they themselves are training against the people. Because, though the "Golden Dawn" is now wearing the sheep's clothing of "pro-labor" attitude, the workers of the Steelworks at Aspropyrgos know very well that in the vital moment when they sought support from their colleagues in Volos, Magnesia, the staff of "Golden Dawn", together with the Union majority there, and together with the local potentates of today's government and their union representatives, did all they could to stop the strike at Manesis' factories, acting as his apparatus.
Αναρτήθηκε από Αντωνης στις 11:38 π.μ. 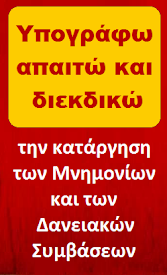